The Bagua and the Five Elements 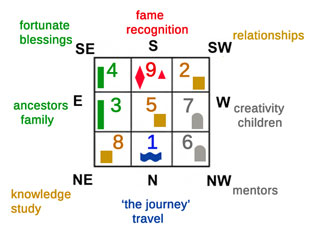 No history of feng shui would be complete without mention of the bagua, which is one of the ancient fundamentals of feng shui.

The bagua is a map of energies, said to represent the essential principles of life. In its simplest and most accessible form it appears as a simple grid of nine squares. It is beyond the remit of these notes to explain the complexities of the information contained within the bagua but detailed information is readily available elsewhere.

Each square, with its accompanying number is indicative of many different things – people, seasons, personal characteristics, times of day, life aspirations, and many others. The bagua grid is laid over the floor plan of a house, and the energies of the house and the potential of its occupants within the house are read from the information contained within it.

Any feng shui survey based apon classical studies and traditions would employ the study of form and compass, with their readings interpreted through the bagua. In addition, time based theories, relatively more recent, known as Flying Star systems are used by the practitioner to interpret the impact of the changes brought about by the passage of time. In this process the energies 'fly' in a particular direction around the bagua grid from a central point which is determined by the period cycle number, the year number, month number , day, etc. The second figure, below, indicates the current fate cycle, 8.

Also fundamental to Feng Shui is the ‘Theory of the Five Elements’ which is a study of the movement of energy, its different manifestations and its creative, supportive and controlling cycles. Throughout these cycles elements support each other, drain, destroy, or control each other. The elements; earth, metal, water, wood and fire relate to points of the compass, indicate different properties and characteristics, and are used, physically and metaphorically in the home with the intention of draining, depleting or supporting energies as and when they are needed, to obtain balance and harmony. 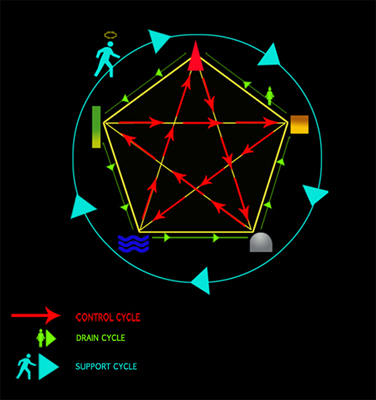